HOW TO CARE FOR CHERISHED FAMILY PHOTOGRAPHS 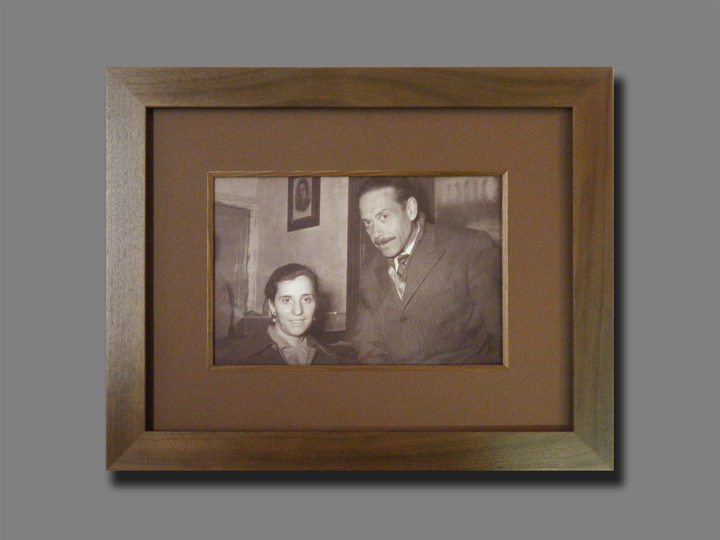 Family photographs give us a tangible link to our past!

A client recently brought me a “postcard” portrait of his Grandparents that had been taken in the 1930’s.  The postcard measured 4″ X 6″, and showed quite a bit of wear as well as a significant rip that been scotch taped.  We were able to scan, digitally repair and reprint the photo to a strikingly sharp 8″ X 12″.  A simple yet tasteful solid walnut frame and fillet combination was chosen (Larson-Juhl “Cranbrook” line) and paired with a complimentary 4-ply rag mat.  Even though the finished work was essentially a copy, we glazed it with conservation glass to reduce the damaging effects of UV light.

What are the advantages of handling a job in this manner?  For starters, the original is not on display (in fact, it’s in an archival sleeve INSIDE the dust cover of the copy) and thus will not be affected by UV light at all…it’s in the dark!  Secondly, once the hard work of scanning and repairing is done, so making extra copies for family, friends, etc. is just a matter of having them printed.

Certainly every photo is not a candidate for this kind of treatment…but you know the ones that are.  Take care to preserve them now so they can be enjoyed, shared and their story can be told!

Starting in 1906, the Eastman Kodak Company in Rochester had begun producing various models of Kodak “postcard” cameras that had negatives that were postcard size. The resulting postcards had such clear images, adding greatly to their popularity. In addition, some of these models had a small thin door on the rear of their camera body that, when lifted, enabled the photographer to write an identifying caption or comment on the negative itself with an attached metal scribe.21 Because these real photo cards were true photographs, postcard collectors have tended to consider them more collectible than lithographic cards—their unaltered presentation of the life and times of the early 20th century.

This site uses Akismet to reduce spam. Learn how your comment data is processed.